The 1967 hit, an ode to the people and places along a Liverpudlian street, contains a line about roundabouts. Redington loved roundabouts, perhaps more than anyone in Vermont. He is credited with developing New England’s first roundabout, in Montpellier in 1995.

“Penny Lane” has been on McCormack’s mind since last week, when Redington passed away after a year of battling cancer. He was 83 years old.

A fierce activist, Redington fought for safer transportation in Burlington. He was a force behind grassroots efforts to oppose both the CityPlace Burlington project and the Champlain Parkway – positions that pitted him time and time again against city officials, but which earned him respect.

Redington’s death has prompted an outpouring of tributes that add to his legacy as a tireless defender who led from behind and disarmed his critics with a smile.

“If something had to be done, chances are someone would point the finger at Tony, and Tony would do it,” said Steve Goodkind, former Burlington public works director, fellow activist and friend of Redington. “He kept pushing. He relentlessly continued to move forward. 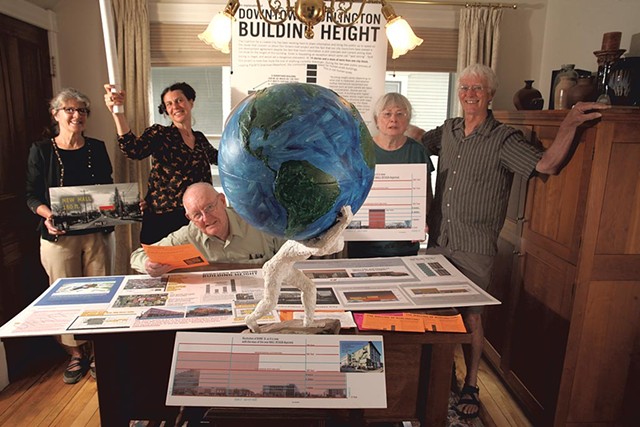 Redington began his transportation career in his home state of New Hampshire. He moved to Vermont in the 1990s for a job with the Vermont Agency of Transportation and settled in Montpellier with his three sons, JJ, Nick and Ben. He coached their Little League teams and brought them to countless sporting events – the New England Patriots in Foxboro, the Expos in Montreal and the Raptors in Toronto. They took public transport wherever they went.

JJ, the eldest of the Redington team, remembers the roundabout opening on Main Street in Montpellier, just around the corner from their house. One morning, JJ’s teacher complained that she had blown her tire while navigating her father’s popular roundabout.

“I was like, ‘Thank you, Dad. I get heartbreak from my teachers,’ JJ said, remembering his dad’s rebuttal: “He was like, ‘Oh, they were obviously driving too fast. “

Redington, who didn’t own a car, moved to Burlington ten years ago and brought his passion for planning with him. He joined the Coalition for a Livable City, a citizens’ group that fought a proposed rezoning that would allow developers to turn Burlington’s old downtown shopping center into 14-story buildings. The coalition didn’t block the zoning change, but the project — now known as CityPlace Burlington — was scaled down to 10 more palatable floors. It still hasn’t been built.

Nor is the Champlain Parkway, a 2.8-mile road planned to connect Interstate 189 in the city’s south to downtown. Envisioned decades ago as a four-lane highway, the parkway is now proposed as a two-lane road with a shared cycle and pedestrian path.

Redington thought the project could be better, and in 2019 he sued the city as a member of the Pine Street Coalition, a group of 150 activists who argued the plans were outdated. A photo of Redington holding the coalition’s legal brief outside the courthouse, a broad smile on his face, shows the lawyer in his element.

The trial was effective. Federal highway officials agreed to investigate whether the parkway would create excessive traffic in the King/Maple neighborhood, the most racially diverse on the project route. In January, the federal government concluded that more cars would end up in the area, but new traffic lights would help.

The coalition, however, is proposing an alternate project design that would remove cars completely from the King/Maple area. Called Champlain RIGHTWay, the road would have separate bike and pedestrian lanes, and traffic lights would be replaced with – you guessed it – roundabouts. The trial is ongoing, although some work on the boardwalk has begun.

Goodkind, another coalition member, said the job would be more difficult without Redington at the helm. As the group’s spokesperson, Redington would regularly email coalition members, the press and elected officials. Each ended with a link to a Change.org petition titled “Stop the Champlain Parkway.”

“He was not a small piece of [the campaign]. He did a lot,” Goodkind said of Redington. “He was relentless in gathering and disseminating information.”

Charlie Giannoni, who served with Redington on the Neighborhood Planning Assembly Steering Committee for Wards 2 and 3 for 10 years, will also remember his colleague as a wealth of knowledge. He recalled Redington addressing crowds at NPA meetings, spouting statistics on motor vehicle accidents and dangerous intersections.

“A lot of people were getting impatient, but he was still pleading for something,” Giannoni said. “He never stood up for anything for himself.”

In the days following Redington’s death on 18 August, NPA committee members suggested that a new roundabout on Shelburne Street be dedicated to him. When completed, the project will create a single lane roundabout with safe crossings for pedestrians and cyclists. VTrans estimates that the design will reduce vehicular accidents by almost 75% – a statistic that would no doubt delight Redington. Giannoni said naming the junction after the activist is a no-brainer.

“He’s been more active in advocating for transportation issues in Burlington than any other human being, and that includes directors of public works,” Giannoni said.

Redington persisted even after learning more than a year ago that he had pancreatic cancer. He underwent three rounds of chemotherapy and then surgery, only for doctors to find cancer in his liver. He had complications during his last chemotherapy treatment and died at the University of Vermont Medical Center, surrounded by his family.

Redington’s sons announced his passing on Twitter and watched in awe as condolences poured in from councillors, political organizers, a reporter and even the person who delivered his groceries each week.

“He was who he was and people knew him,” his son Nick said. “He made a lasting impression, that’s for sure.”

McCormack, the state representative, agrees. He met Redington in 1990, when he represented Rutland in the Legislative Assembly. Not wanting to commute every day, McCormack rented a room at the Redington home in Montpelier during the session. The two quickly became friends and worked together on various transportation projects, including early efforts to revive passenger train service to Burlington — a goal that was accomplished just weeks before Redington’s death.

Redington’s death, meanwhile, helped McCormack finally achieve one of his own goals. This week, after many failed attempts, the state representative picked up his guitar and played the chords to “Penny Lane.” He walked through it twice, intoning the lyrics.

“I learned the song for Tony,” McCormack said, lamenting that he never got to sing it for his friend.

“He will be missed really, really dearly,” he said. “I really don’t know anyone else like him.”

Artemis I launch on track for Monday, ...